The most common pathway for the introduction of invasive marine species has been vessel biofouling, followed by ballast water. Biofouling is the attachment of organisms to the wetted portions of boats and ships, while ballast water is water taken up or released by a ship to provide stability. This page is a compilation of reports, summaries, and  studies focused on addressing these two pathways in Hawaiʻi in order to ensure better protection of our marine ecosystems.

During the fourth installment of the HISC Brown Bag presentation series, aquatic invasive species expert Jules Kuo describes new approaches to minimizing the transport of marine invasives to Hawaii. Jules reviews proposed regulatory approaches based on risk assessments for both ballast water discharge and hull fouling organisms. Her presentation also reviews some of the new tools available for safe in-water cleaning of hulls. 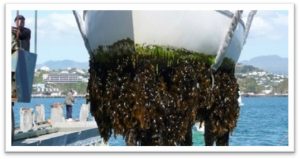 Macrofouling on vessels can contain hundreds of organisms and create drag which increases fuel costs and be incredibly difficult and costly to clean. Photo: DLNR-DAR 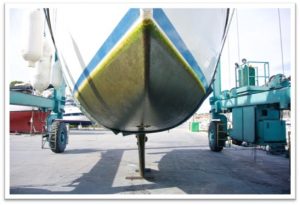 Microfouling, or the thin slimy layer, can build up after only 1 hour in the water. Photo: DLNR-DAR