Why should we care?

Invasive species affect everyone and every aspect of life in this remote island chain.  Our buildings are eaten by termites, our water supply is at risk because the native forests are at risk, our local-grown fruits and vegetables are attacked by fruit flies and more, our heritage trees like wiliwili are killed by gall wasps, and our reefs are smothered by invasive seaweed. 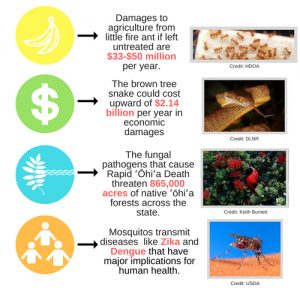 In the future, if we are not vigilant in keeping new pests out, we might find the baby being bitten by brown treesnakes as occurs on Guam, new ants that pack a sting a thousand times worse than our current ants, mosquito bites that can give us debilitating diseases, and perhaps new diseases that attack and kill our ohia or koa trees. We can prevent these new invasive pests and control the worst pests already present if we make it a high priority for our government, and if we participate in initiatives to protect Hawaii from invasive species.

Q: Are all non-native or introduced species also “invasive species”?

A: No. Some plants and animals that are introduced to a new location outside their normal range do not reproduce quickly, spread, or cause harm. Examples of introduced plants that are not invasive include pineapples and plumeria. Some synonyms for “non-native” are alien, introduced, exotic. In Hawaiʻi, we tend to use two other terms for a group of plants brought here by Polynesians: “canoe plants”, or “Polynesian introduced” plants. For example, kalo is a non-native plant to Hawaiʻi, it is a Polynesian introduction.

Q: What are “native species”?

A: Plants and animals that arrived at a location (Hawaiʻi, for example) without human assistance (via wind, wings, or waves), and their descendants, some of which may have changed over millions of years to look or act quite different from their ancestors. Some examples include Hawaiʻi’s honeycreepers, silverswords, happyface spiders, longnosed butterflyfish, and all of our oʻopu.

Photo credit: Nate Yuen. Hawaiian ecosystems are unlike any other in the world. They host an array of species, many of which are found nowhere else.