The Coordinating Group on Alien Pest Species (CGAPS) is a voluntary partnership of federal and state agencies and non-governmental organizations whose goal is to protect Hawaiʻi from invasive species that impact the economy, environment, agriculture, and public health. CGAPS works to close the gaps in Hawaii’s terrestrial and aquatic invasive species prevention and response systems through greater coordination, planning, and management.

Two significant reports in the 1990s (NRDC TNCH 1992; OTA 1993) found that Hawaii had the nation’s worst invasive species problem due to gaps in prevention, detection, and control programs. These reports concluded that many of these gaps could be addressed through increased inter- and intra-agency communication, cooperation, and by increasing public awareness and participation. It is not coincidental that the acronym for the Coordinating Group on Alien Pest Species is pronounced “C-GAPS.”

CGAPS was formed in 1995 to address these gaps. Today, CGAPS participants are primarily management-level staff from every major agency and organization involved in invasive species work in Hawaiʻi, including federal, state, county, and private entities. 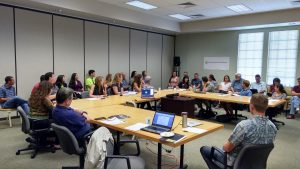 The Steering Committee and participants of CGAPS engage in CGAPS inasmuch as the actions and views presented are allowable and do not include prohibited practices for government employees or the appearance of such practices.