The State of Hawai‘i, in a broad coalition of stakeholders led by the Department of Agriculture and the Department of Land and Natural Resources, has adopted the State’s first interagency and comprehensive biosecurity plan to protect Hawai‘i’s agriculture, environment, economy and health.

The scope of the Hawai‘i Interagency Biosecurity Plan addresses three biosecurity areas including pre-border (for example, agreements on handling and treatment of products before they enter the state), border (for example, inspection authorities and technologies), and post-border (for example, tools and capacity for response after invasive species have become established). The benefit of a comprehensive interagency plan is that it facilitates actions and policies across a wide range of agencies and partners.

The plan includes roughly 150 action items assigned to various agencies and stakeholders, with specific details on how and when to best implement each action.The plan is a strategic systems analysis, rather than an operational plan that analyzes response protocols for individual species. It identifies critical gaps in our biosecurity system and suggests policies, processes, and resources to address those gaps. The plan recommendations cover a number of important topics, including: 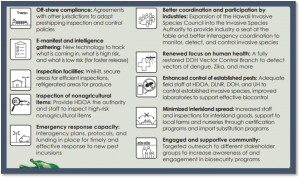