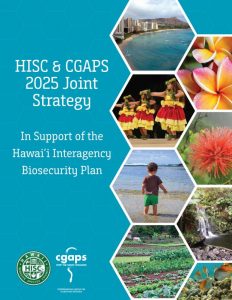 The State Legislature declared invasive species as the single greatest threat to Hawaii’s economy, natural environment, and the health and lifestyle of Hawaii’s people and visitors (LRB 2015).  The 2025 Joint Strategy for the Hawaiʻi Invasive Species Council (HISC) and the Coordinating Group for Alien Pest Species (CGAPS) reflects the highly productive collaboration of these two statewide networks to achieve our shared vision: Hawaii’s natural environment, agriculture, economy, and the health, lifestyle, and culture of its people are protected from the impacts of invasive species.

This HISC & CGAPS 2025 Joint Strategy (HISC/CGAPS 2025) builds on more than 25 years of effective action, successful network-building, gap analyses and lessons learned – starting with the creation of CGAPS in 1995 and the establishment of HISC by state statute in 2003. The strategies and key actions outlined in the plan were developed using a broad participatory process with input form more than 100 partner across both networks and in support of the actions identified in the 2027-2027 Hawaii Interagency Biosecurity Plan.

For information about participating in the HISC Working Groups or to be added to the listserv, please contact Randy Bartlett, HISC Interagency Coordinator at randal.t.bartlett@hawaii.gov.

CGAPS Strategic Plan 2015 to 2019 identifies five priority goals with specific actions to focus on over the next five years. The goals are:

2009-CGAPS-Vision-and-10-Point-Action-Plan was finalized in December 2009. It documents the ten most important issues that must be resolved to effectively prevent, detect, and manage invasive species.

2009-CGAPS-Actions-by-Agency is a short document based on the CGAPS Vision and Action Plan, with just the immediate actions for each agency. It is intended to be used by the group at CGAPS meetings to discuss progress needs.